On Greek island Chios, I spent just some hours and used the waiting time for the ferry to fill up my pockets with Euros, before leaving the EU. Due to the embargo, Iran doesn´t accept foreign bank cards, so I have to bring enough money for currency exchange.

The ferry from Chios to Cesme is tiny, only two cars and some passengers fit. But there were three cars waiting in front of the small terminal, one Turkish, a German overlander, and my van. I was quite lucky, because the German´s wanted to save money and booked the ticket for a small car, but they had a big Landrover.
So they were rejected and had to wait until the next day, and I could embark the ferry. 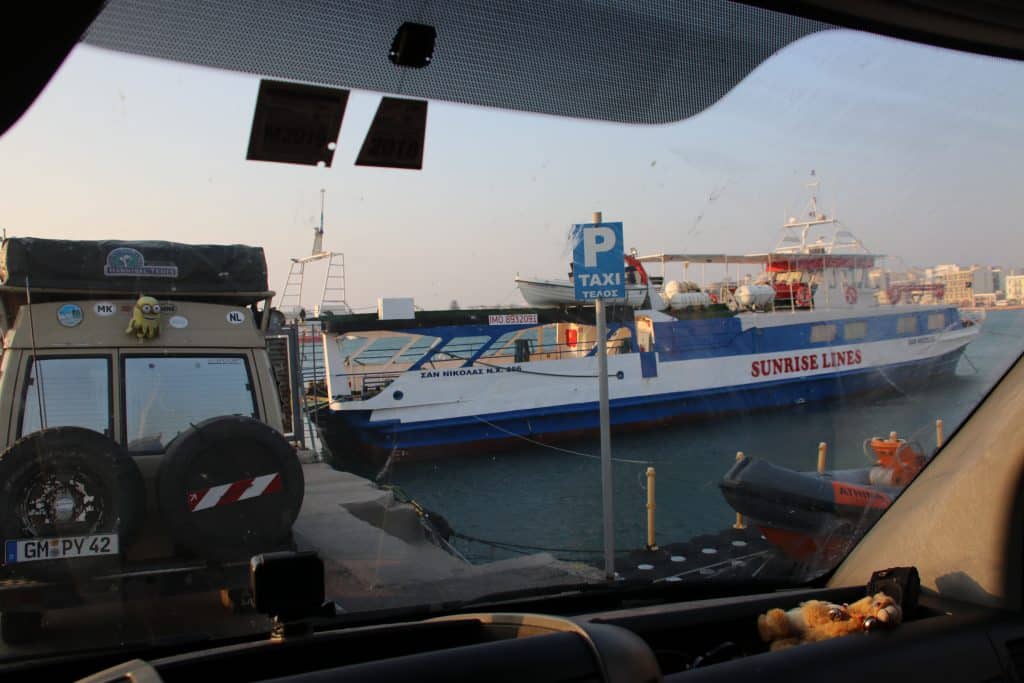 The sailing takes only 30 minutes, but it was quite a ride, because of strong wind and waves.

The immigration process was easy, and they didn´t even ask for my E-Visa. After a short inspection of my car, I could enter Turkey.
My first destination was Alaçatı, Turkey´s world-famous Windsurf-Mekka. And I was not disappointed; I had some fabulous days with perfect wind conditions. 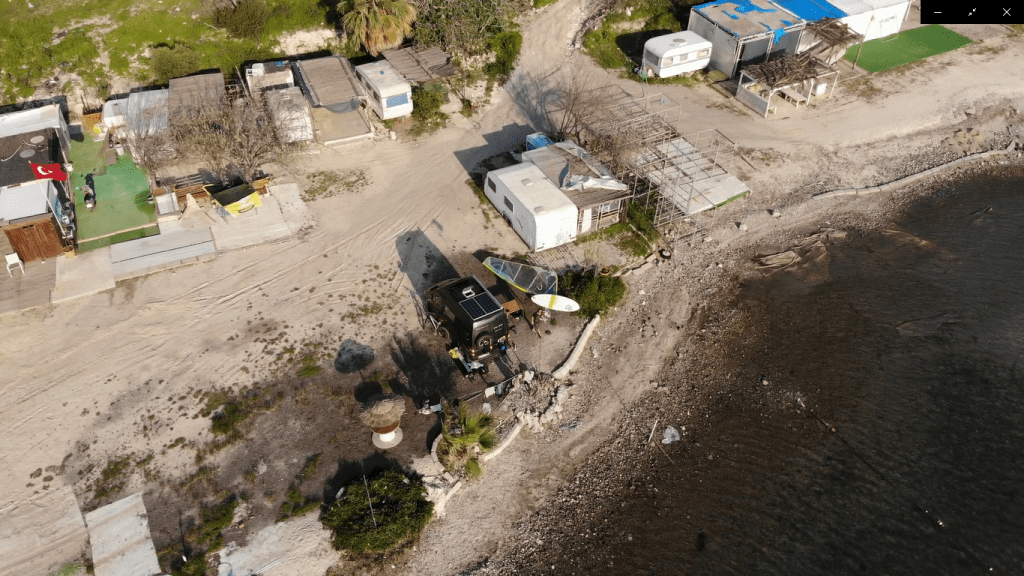 In 2013 I spent already a year in Turkey when I discovered the Mediterranean coast with Pepe, the motorbike of my friends Özge and Hus.
So I had quite a plan where to go and followed the coastline, passing beautiful wild beaches, peninsulas and hidden bays.
On a perfect camping spot which I caught on google maps (surprisingly it wasn´t on iOverlander), I met Dutch overlander Rogier, who is traveling to Australia within a timeframe of 5 years. Visit him at https://www.facebook.com/seekingtheedge and seekingtheedge.com 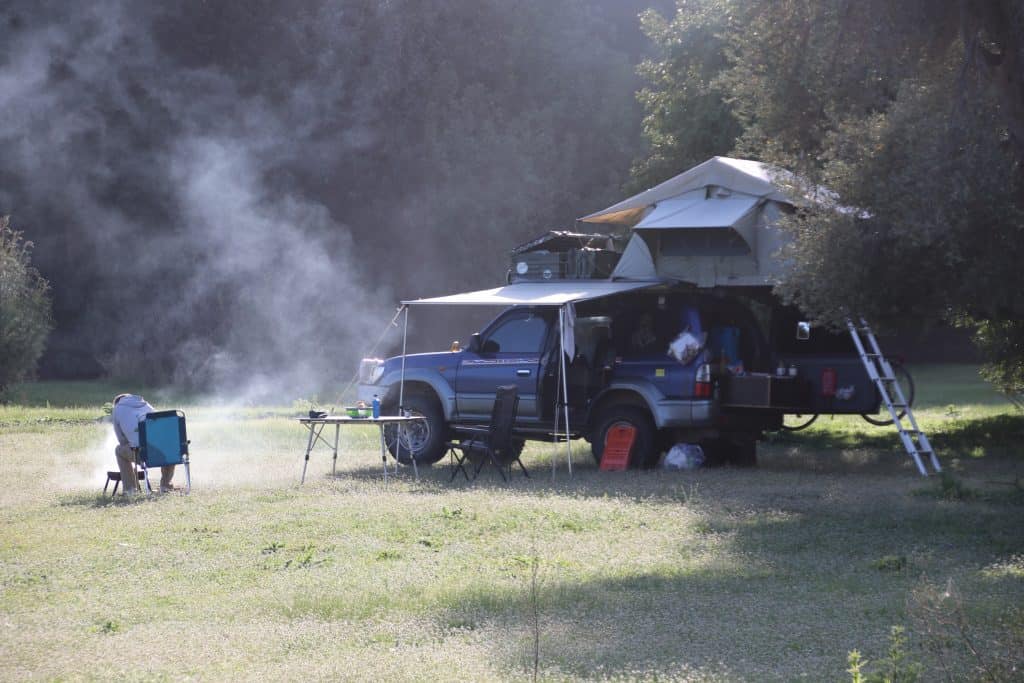 When I was entering Turkey, my compressor fridge died, so I had to repair it. The best place to do so would be the Marine guys, which are spread all over the area, I thought.
But they made me an offer for more than 500 Euro for fixing the fridge. So I decided to send it to the central Turkish distributor of Dometic in Istanbul. The next weeks were quite cold, so the fridge was not essential for my trip.

I continued to Butterfly Valley and Kabak where I visited my friends at Reflections camp, where I volunteered in spring 2013.

After spending some days on the beach with fish BBQs and some swims in the sea I continued to the East, passing Antalya and the extremely touristic Turkish Riviera, full of German and Austrian full-package tourists. The area East of Antalya was new for me, and I was quite disappointed what tourism has done to this coastline.

The scenery changed after Anamur – where I found it again – a wild coastline and small mountain roads.  I camped at a great spot close to the port of Taşucu, where I considered to take the ferry to Cyprus. 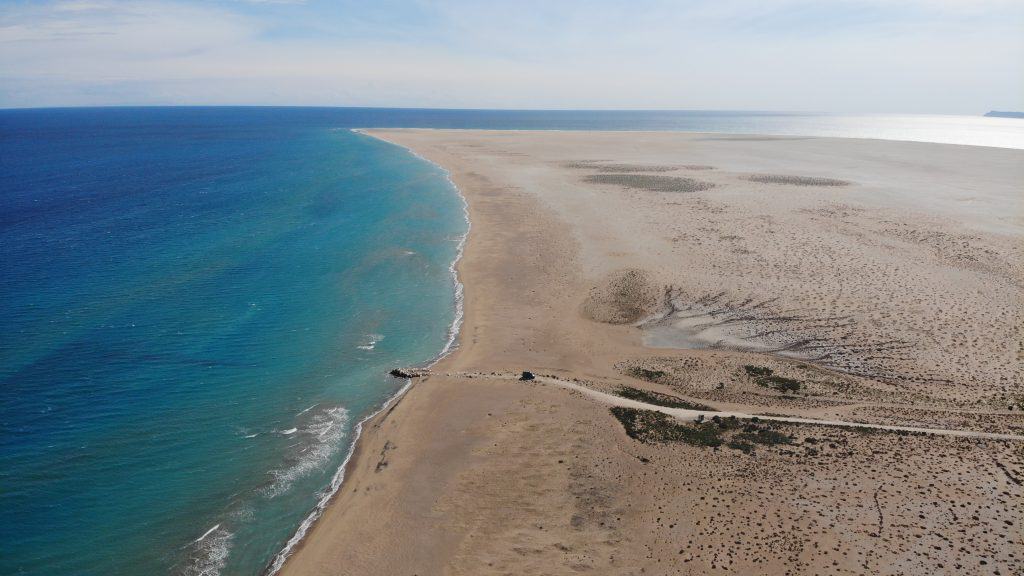 But the next ferry departure was three days ahead and I didn’t want to wait, so I had to say Good-Bye to the sea for a while and continued to Eastern Anatolia – in direction Mount Nemrut.

Some months ago I started to join some Overlander Facebook groups and got in contact with travelers who have the same plan. One of them is David Campo (https://campoatraves.com) from Barcelona, who I met at the foot of Mount Nemrut. 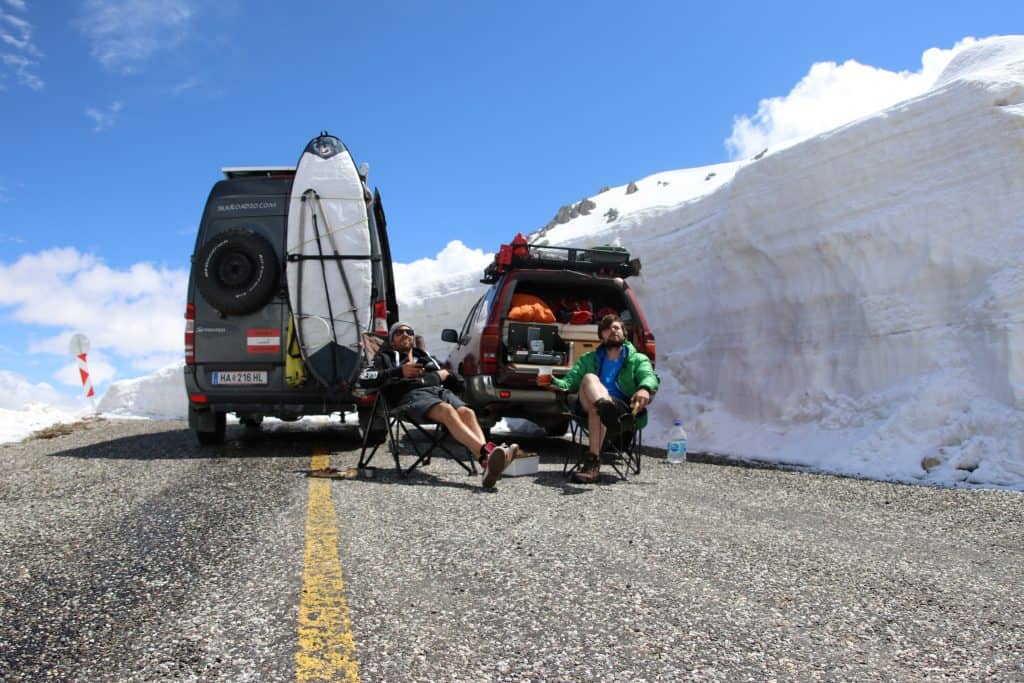 We had some great days and decided to continue our journey together.
On top of Mount Nemrut, we met Swiss couple Marco and Anja from www.rockinrosie.com, who are traveling in their self-converted  Landrover “Rosie” and planning also a similar route.

From now on we were four people in three cars heading East in direction Iranian border.

On Lake Van I had a Windsurf session in extremely severe winter conditions, it was so cold that we spent most of the days inside the van watching movies and the Swiss sipped their last booze before non-alcoholic Iran. 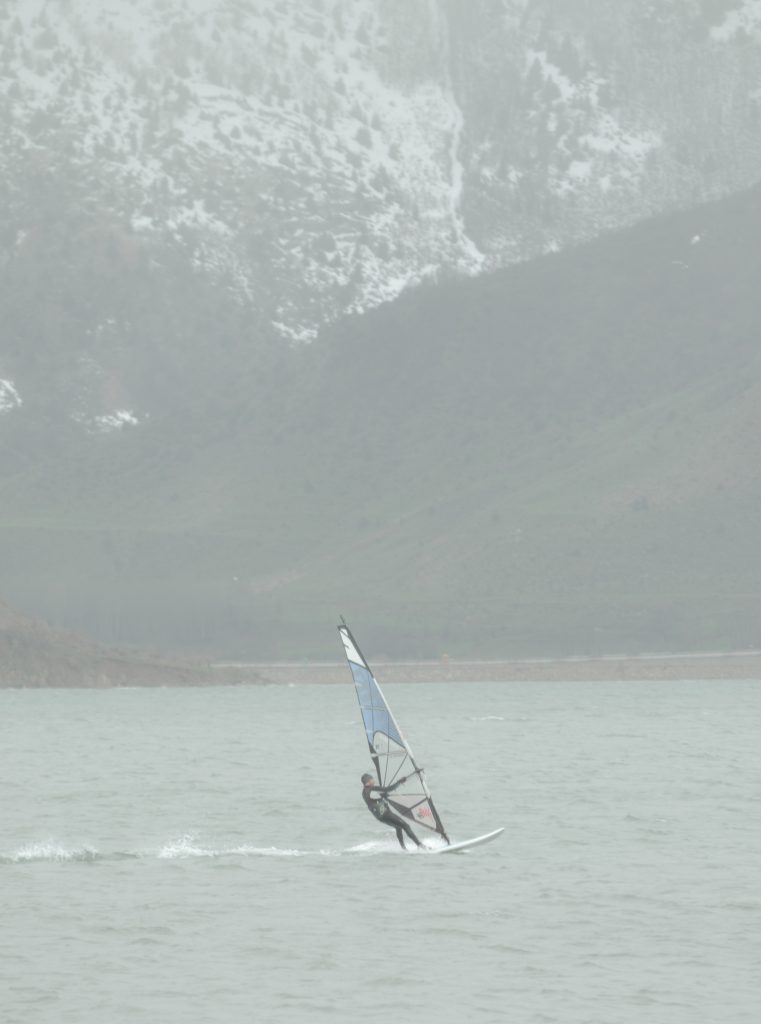 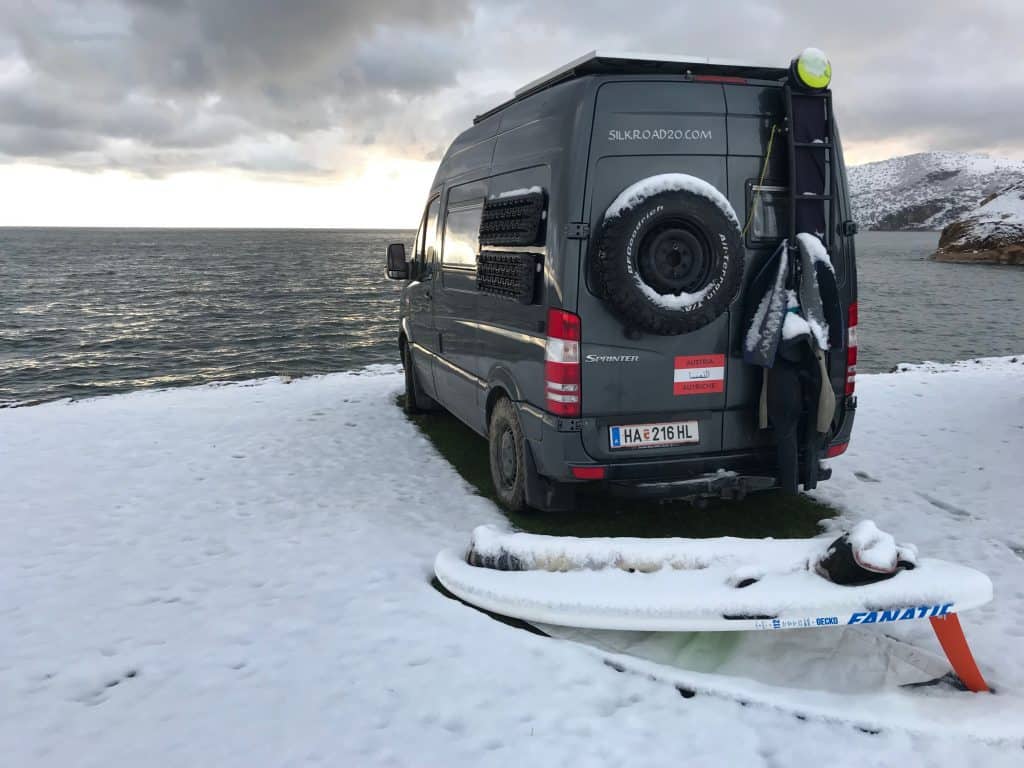 In a small town close to Van I met Swiss travelers Walter and Ruth Odermath from reisevirus.info, who are on the road since 2014  and traveled via Mozambique, Tanzania, Ruanda, Uganda, Kenia, Ethiopia, Sudan,  Saudi Arabia, The Emirates and Oman from South Africa. Walter is the author of “Abenteuertour Seidenstrasse,” which is one of the books I have with me. 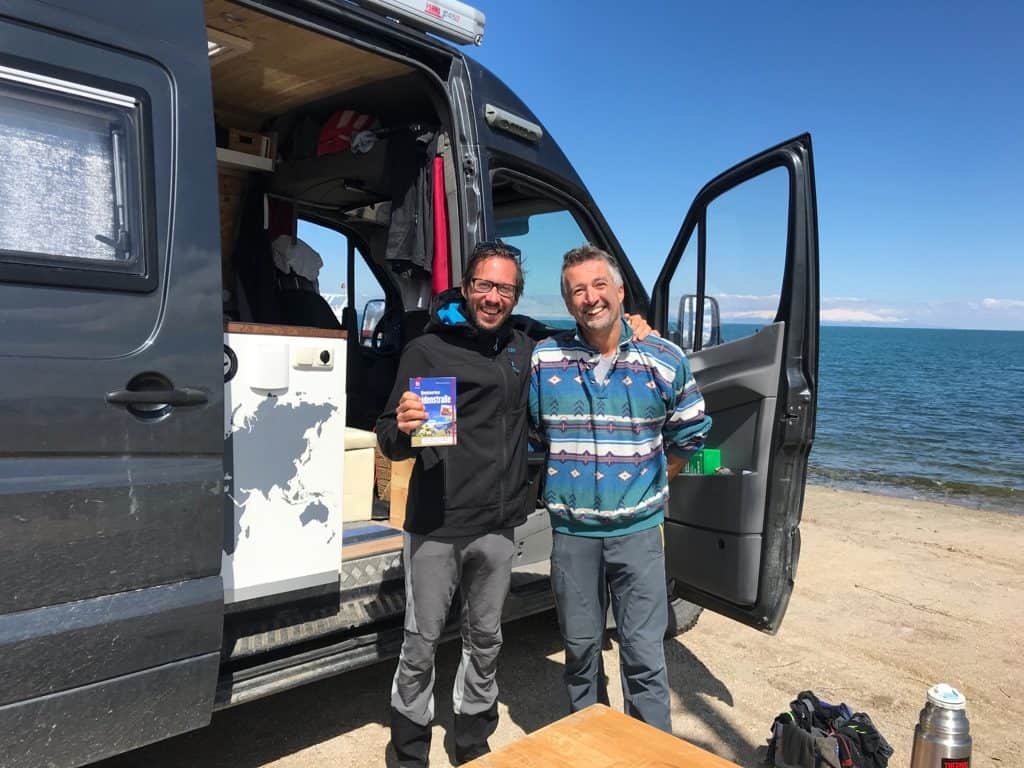 Everything was prepared for the border crossing to Iran, but one important thing was still missing: my fridge.
After the confirmation of the successful repair, I booked a flight to Istanbul, picked up the fridge and returned the same day.
Anja, Marco, and David were already close to the border, and I followed them on the next day.

Now the next issue had to be fixed: Iran has a very poor quality diesel, which my Euro5 car doesn´t like too much. So I  bought 250 Liter of best quality euro diesel at the last petrol station before the border.
It was quite a circus while filling up all the tanks and the owner of the station told me it was illegal to bring that amount diesel over the border. On top of this, the whole process seems quite stupid – because diesel in Iran is extremely cheap (0,07 Eurocent/Liter).

But I had no option and decided to smuggle it to Iran, to continue my journey to the East without being restless about the engine all the time.