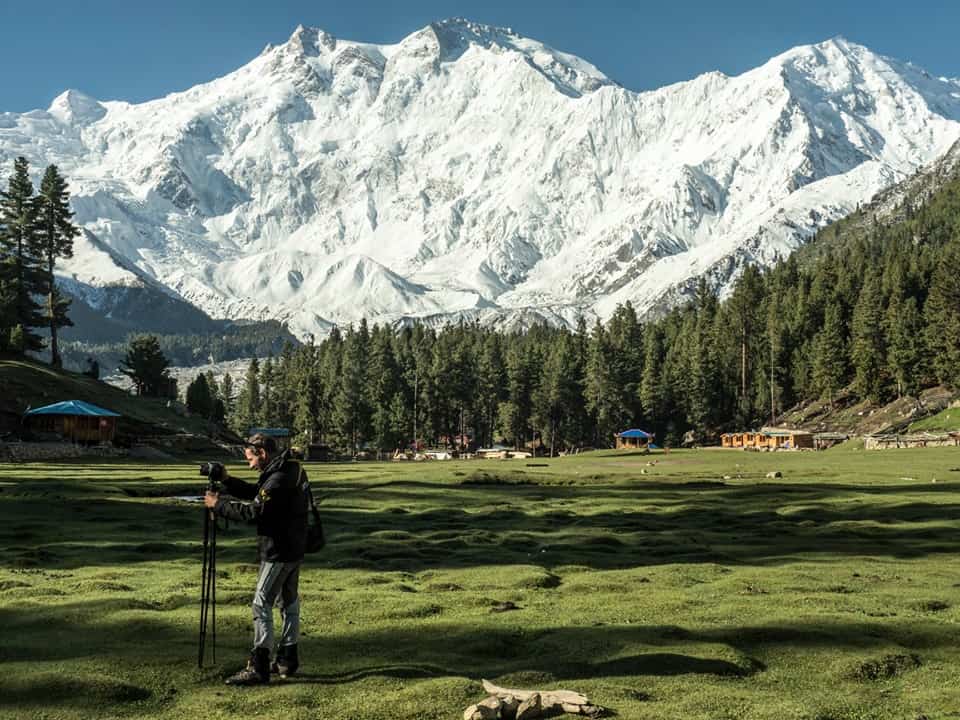 Nanga Parbat is a must-see while visiting Pakistan. To have this amazing view, we took one of the most dangerous roads in Asia and a short trek to Fairy Meadows. The road wasn’t built by a government, but by local jeep drivers. And they maintain it as well.

Theoretically, you can ride a motorcycle there, but it’s just not right. We decided to take a jeep for a few bucks. However, when we arrived at the place where the jeeps start from, there was a problem. There were no jeeps, and actually, there was no road there either. Some fragments of it were washed away during the last heavy rainfalls, some others were covered by landslides.

All the drivers were busy with road works. We agreed to walk through the whole thing. Eventually, we managed to get into a car that was going to join the other working drivers. These 20 minutes in the jeep saved us a lot of time! I must admit that even I love all these dangerous roads, this one was really thrilling sometimes. The jeep was barely fitting the road, and 30 cm from the wheel there was a drop of several hundred meters. The driver, whistling to local music, didn’t worry about anything.

When we reached the place where the road collapsed, we started to walk. Instead of 1.5 hours, we had to hike 5 hours, but in such surroundings, we could only be happy about it.

From the moment when the Naked Mountain appeared, we walked like hypnotized in its direction. We were lucky – there was not one cloud in the sky, a perfect view.

When we reached Fairy Meadows, it turned out that our luck is even bigger. Due to the collapsed road, there were no tourists, all the cottages were empty. Except for a few people from the staff – just us and the mountains. In the we ran away from people! After photographing the sunset, we ordered dinner… And here, ladies and gentlemen, my adventure with Nanga Parbat ends. I spent the evening and the whole next day on the toilet. Roman went towards the base camp 1, but stones, shooting on the trail, stopped him. Meanwhile, I was trying to get better. 24 hours and 6 diarrhea pills later, I decided to give it a try as well… Unfortunately, after day on the toilet, without eating and throwing up breakfast, I was not in the best shape. Hiking up for 15 minutes, I thought I would pass away. I got just to a nearby viewpoint and turned back. Going down was easier.

Eventually, I can’t complain anyway – some people get much further, but, due to the clouds, they never get a chance to see the summit… Besides, let’s be honest: diarrhea is an indispensable travel companion. And if you want to visit some countries, you just have to live with it.